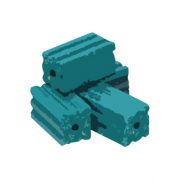 Thanks to Giulia Sozio and Paolo Sposimo, of the NEMO Srl company, for the development and elaboration of this technical report.

Thanks also go to our friend and trusted professional Dr. Dario Capizzi, who guided us in the project.

Currently, the control of rodent populations is achieved, in almost all cases, by the administration of rodenticide baits. In order to be accepted and ingested by the target populations, these baits must be formulated in such a way as to guarantee adequate palatability.

The aim of the experimentation is to evaluate the palatability of 4 formulations of rodenticide baits with different composition.

The assessment of the palatability of the formulations was carried out through food choice experiments, consisting of field administration and subsequent statistical analysis of consumption (grams of bait consumed) detected over time by the target rodent populations.

The four products to be compared are all 0.005% bromadiolone paraffinated blocks + denatonium benzoate:

Product “A”, Product “B” and Product “C”: formulations of Italian producers.

The study was carried out in Rome in two different areas (Picture 1):

• an Equestrian Club (hereinafter referred to as the “Riding School”), located along the banks of a river, in the middle of the metropolitan area.

Pict. 1. Study areas and Bait Stations positions: on the left the Agricultural Company and on the right the Riding School

Before starting the experiment, an inspection was carried out to confirm the presence of rodents in both areas with the positioning of 6 bait stations in each one, checked after 3 days (Stables) and 4 days (Farm). In both areas, the presence of rats (Rattus sp.) and mice (Mus musculus) was confirmed, therefore the experiment continued with positioning of the remaining bait stations.

Experimental design and positioning of the bait stations

The baits were administered in both areas with the same experimental design. The products, anchored to the specific pins, were placed in the bait stations in pairs, with 2 blocks per product positioned alternately (eg ABAB). Each pair therefore represented a direct comparison between two products, or trials. The pairs were assorted so that the six possible combinations were represented in equal numbers (N = 8; Table 1). Based on this design, each individual trial was replicated 8 times, and each formulation was administered in a total of 24 bait stations.

The bait stations have been positioned opportunistically in points deemed suitable or reported by local staff (e.g. along the banks of the river, inside huts with feed or cereals, near the stables, etc.). 12 points were selected in each area, and 2 stations 1-10 meters apart were positioned near each point, assorted so that all 4 products were available at each point (for example: around point 1 a station with AB products and one with CD products was positioned). This has been done to increase the chances that each rodent could come into contact with all four products and be subjected to at least two comparison trials.

Where necessary, the bait stations were anchored to the ground with wire, and coarse salt was also inserted inside them to limit the interference of slugs and snails. The use of insecticidal bait for ants was not necessary.

The bait stations were checked on alternate days 5 times (plus an initial 0 check for 12 stations to confirm the presence of rodents; Table 2).

At each check, a bait station was defined “visited” when there were clear traces of consumption (reduction of the bait, clear grooves of the incisors) or rodent excrement inside (Picture 2). The residual baits were weighed using a spring balance (precision 1 g) to quantify their consumption, obtained by difference with respect to the weight of the previous check. The blocks worn for more than half of their weight have been replaced to ensure greater product availability. Finally, the position of the baits inside the stations was reversed at each check to exclude any effects due to the position and / or experience of the rodents (for example, if at the first check the products were positioned according to the ABAB scheme, at the subsequent check their position was reversed, according to the BABA scheme). The data were analyzed at different levels:

BAIT STATIONS INSPECTIONS: in this phase the probability of visiting the bait stations  was analyzed (1 = visit, 0 = non-visit), regardless of the quantity of bait consumed. The results are therefore to be referred to the effect of the attractiveness of the baits towards rodents, who are pushed to enter the station and possibly taste the product.

CONSUMPTION: this figure reflects the degree of preference of the rodent towards the products. Once entered in the bait station, the rodent will tend to consume more what is most palatable. This analysis was carried out at the level of:

– Total consumption, obtained from the total sum of consumption in the 10 days of the test. The results give a measure of how much the products are consumed overall compared to each other in multi-day administrations.

The excrements and signs of consumption attributable to rats (Rattus sp.) and mice (Mus musculus) were detected in the bait stations, with a greater abundance of signs of rats in the riding area. We report the direct discovery of a specimen of Rattus sp. (probable R. norvegicus) died near a bait station placed near the river bank at the stables. It was not possible to proceed with an autoptic examination of the specimen, however its finding near the bait station, the presence of very marked grooves of the incisors on the residue of the bait blocks, and the presence of traces of blood inside the bait station, make it highly probable that the rat died following the ingestion of the baits. Despite the discovery of a (probable) specimen of R. norvegicus, it cannot be excluded that there were also individuals of R. rattus in the area. In the riding area, the presence of mice was also detected directly following the escape, on two occasions, of individuals who were inside the bait stations during the check. The same direct sighting of mice during the control took place in the area of ​​the farm, where a dead specimen of M. musculus was found inside one of the bait stations, with traces of blood on the tail (Picture 2). 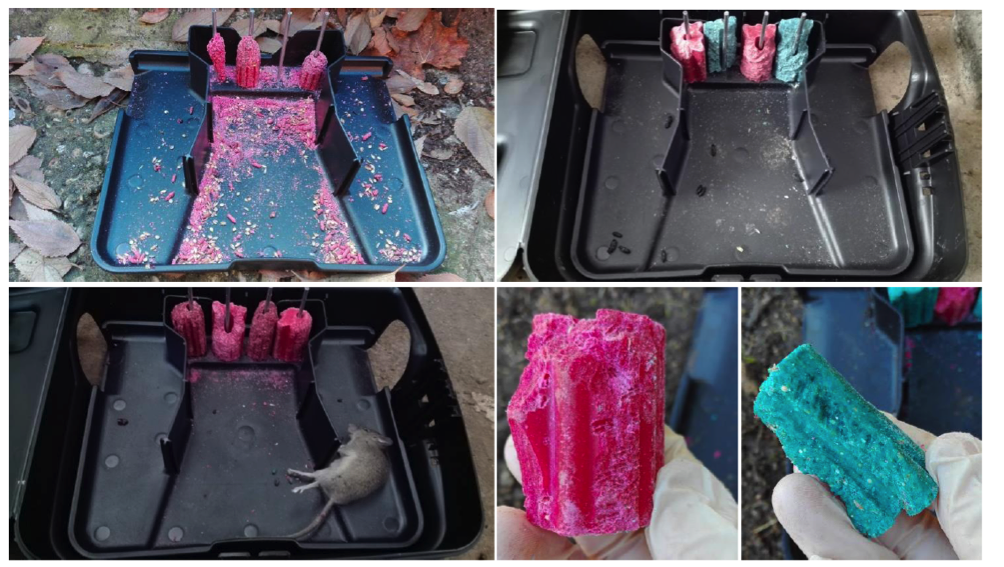 Pict. 2. Examples of traces of consumption found inside the Bait Stations

The visits of the Bait stations

In the 10 days of administration, 37 bait stations out of 48 (77%) were visited at least once, of which 18 at the farm and 19 at the riding school. For unidentifiable reasons, 11 bait stations have never been visited and have therefore been excluded from consumption analyzes. The inclusion of such data would in fact have influenced the results by incorrectly reducing the differences between the products, since zero consumption would not have been attributable to the same palatability but rather to the absence of a visit.

In general, there has been a reduction in visits to regulators over time, probably due to the death of individuals following the intake of the rodenticide.

Visits to bait stations containing different products seem to follow the same type of trend over time, with the exception of product B which, following a larger initial increase, seems to decrease faster. Statistical analyzes, however, did not reveal significant differences in the visit rate by product
(p> 0.05).

Therefore, there does not seem to be a product that attracts rodents better or earlier than the others.

It should be noted that these results refer exclusively to the attractiveness of the products, that is, to the probability that a rat visits the bait station regardless of the extent of consumption (analyzed in the following paragraphs).

Total consumption (sum of consumption of all bait stations) had a similar trend in the two areas (Picture 3), with a first increase in control 2 and a subsequent gradual decrease. This trend, which reflects that of visits to the bait stations, is probably due to the overcoming of the initial mistrust by rodents, followed by the progressive death due to the consumption of baits. 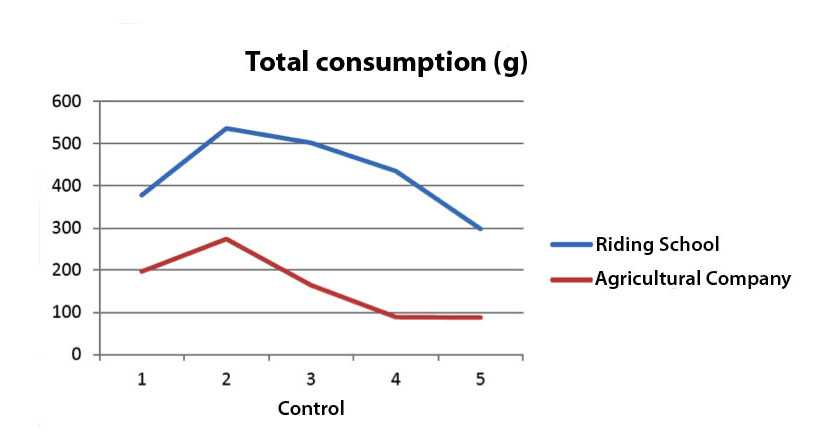 Pict. 3. Total bait consumption (sum of all Bait Stations) in the two areas at each control.

Overall, consumption reveals a clear pattern, similar in both areas, where product D was the most consumed and product B the least consumed. There is also a certain variability in consumption between different bait stations, showing a highly heterogeneous situation with some highly frequented and consumed stations, and others much less (Picture 4). 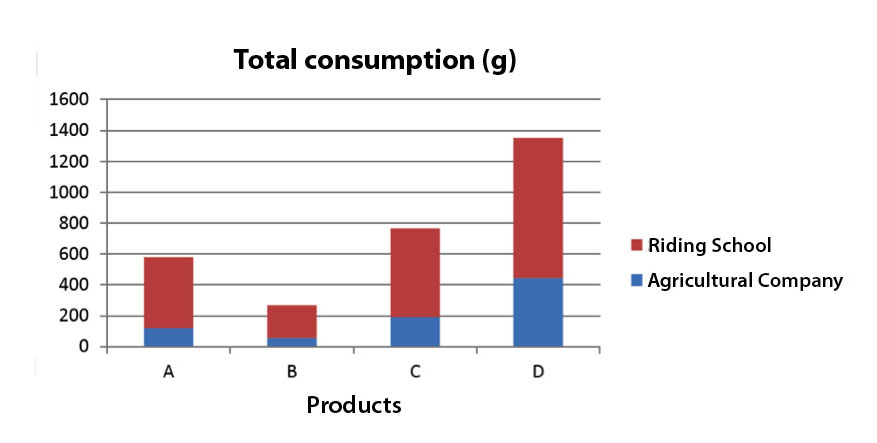 Pict. 4. Total consumption of the four products (sum of all Bait Stations and all controls)

The analysis of variance confirms that the differences in total consumption between products are statistically significant overall (p <0.0001), and the result does not differ in the two areas (product interaction * area: p> 0.5).

Post-hoc tests reveal that the only non-statistically significant differences are those between product A and products B and C. Between A and B the absence of significance could depend on the size of the sample and not on a real absence of differences, also whereas between A and C the difference is significant.

Overall, therefore, the consumption ranking is D> C = A ≥ B.

SUMMARY OF RESULTS AND CONCLUSIONS

There was a peak in visits to the bait stations and consumption at the second checkup, followed by a gradual reduction over time (probable overcoming of the initial distrust followed by death by ingesting rodenticides).

There does not appear to be a product that induces rodents to visit a station more frequently or earlier than the others.

The product that denotes the greatest palatability, both overall and compared individually with other products, is Notrac Blox.

The differences between the products are the same regardless of the area and control, testifying to the general validity of the test results.